Newborns are adorable, but they aren’t interested in much beyond the baby basics: milk and sleep. I was really surprised by how little captured Theo’s attention in those early days.

At around 3 weeks we found we could introduce a few stimuli for Theo to engage him for short bursts to hopefully help his brain develop and basically turn him into the next Elon Musk. Kidding, we just wanted to see what could distract him and hold his interest besides being carried around and bounced by one of us (my arms are dead, guys. DEAD).

Here are a few things we found that our newborn actually showed interest in before he even had control over his tiny hands: 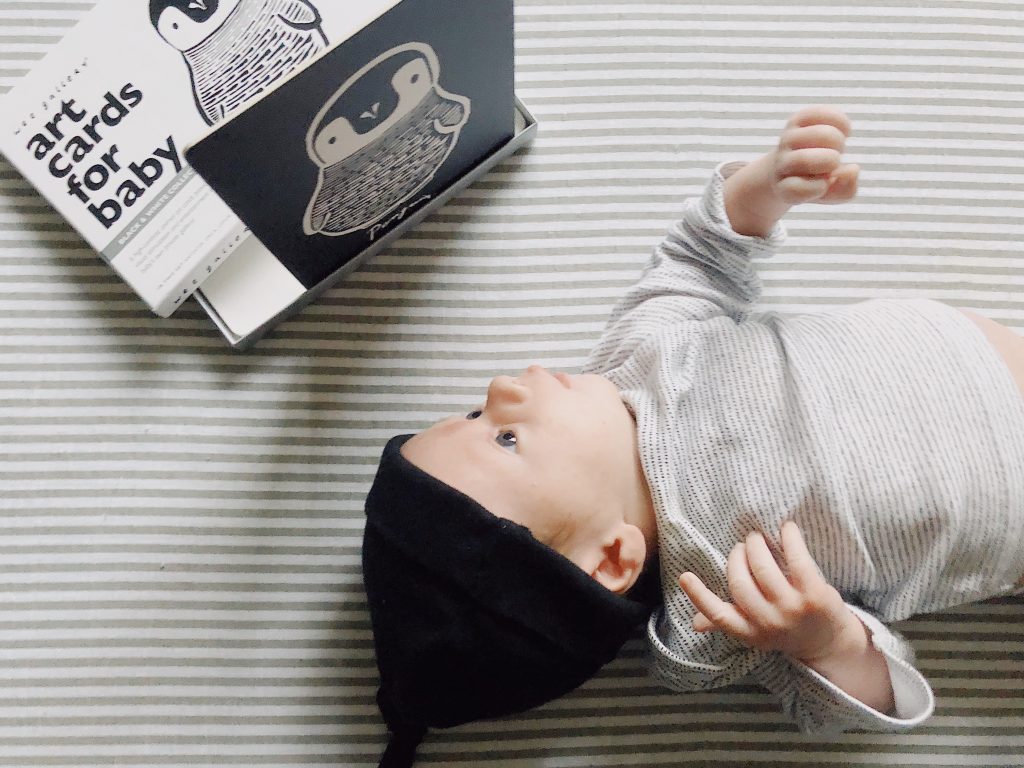 At some point during my pregnancy, I read that newborns have pretty poor vision at birth and don’t actually develop the ability to see color until after the 5 month mark, and even then their vision still hasn’t fully matured. I think I was worried that I chose too many neutral toys after registering for a wood and white play gym instead of something in a million bright colors.

A week or two ago I was looking into ways to interest a newborn and re-discovered this info and then fell down the rabbit hole of high-contrast books and cards. Because of the limited vision babies have, using the right imagery can be a way to engage their brains, even when they’re teeny. From the Wee Gallery website:

“HIGH CONTRAST imagery offers the best opportunity for newborns to focus on visual stimuli and promotes visual exploration and engagement. Visual focus on a stimulus such as art cards can foster a SENSE OF CALM and coherence in visually busy spaces.”

I thought this was interesting, so I pulled out a black and white, high-contrast activity pad that I got for my shower and showed it to Theo. His eyes immediately focused on it, his mouth opened and he just STARED silently. It was kind of amazing. His focus didn’t last long, just a few minutes, but it was definitely new behavior.

After that, I went on Amazon and searched for high contrast books and cards. I found a ton of results, most with some of the most positive reviews I’ve seen on any baby item. I ended up ordering a few products that Theo has really responded well to: The “Look, Look” board book by Peter Linenthal and the Art Cards for Baby set by Wee Gallery (there are a bunch of different ones, but we ordered the original set).

I LOVE the board book because it stands up on it’s own and the images are so big with a ton of contrast. The cards are also fun because you can use the box they come in as a stand and they are double sided with one side having a white background and the other, black. They’re also thick like the pages of the board book, which will come in handy when Theo is able to grab and hold them.

We now spend a few minutes at different points in the day letting Theo stare at the book and cards until he loses interest. He looks intently at them every time and seems almost mesmerized. It’s pretty cool and I wonder what sorts of connections his brain is making while he does it. These will be my new go-tos for shower gifts now, I just love them so much.

A couple of years ago I started to get more interested in music (thank you, Austin City Limits).

My parents never really played music growing up, and I consider myself pretty much musically inept, with brief stints playing musical instruments (trumpet at age 10 and guitar more recently). I wish I had more time to take up the hobby seriously, but Dad life and business owner life don’t leave a lot of extra time.

Alex was the complete opposite; growing up she was played classical music constantly. Her dad even made sure to play it for her in the womb before that was common practice. He was a child psychologist and totally ahead of his time.

Although Alex got plenty of exposure, she still considers herself musically inexperienced and has never had much interest in music. Some interests must just be coded in the genes. She is insanely smart though with an incredible memory, so maybe all of that helped.

A year or so before Theo was born, I stumbled on Rick Beato’s video of his son Dylan showing off his perfect pitch. If you don’t know what perfect pitch is, it is the ability to name a note or chord based just on hearing it. People who have perfect pitch can hear something random, like the lawn mower and know the sound it makes is a D flat minor. To me, that’s a crazy cool skill.

It may sound like you could train yourself to do this, but it is incredibly rare and usually must be developed during early childhood. It is coveted by musicians, but it also comes with incredible memory benefits. My understanding is that it cannot truly be learned as an adult and you either obtain the skill early on in childhood or it is lost. It is also possible that it is tied to genetics. We just don’t know enough for sure. Someday science will tell us, but for now, it’s a bit of a guess.

It is worth taking the time to watch Rick’s videos below and spend some time exploring more of his content, it’s pretty mind-blowing.

So how does this relate to Theo and engaging him as a tiny newborn? Well, Rick is the founder of the App, Nuryl. It is essentially a brain training app for newborns and infants using complex, high-information music played for an hour a day to stimulate their brains. You are also supposed to play the music up to 5 months prior to birth in the womb. We bought some sticky headphones to put on Alex’s stomach while Theo was cooking to get him started early.

Now that he is here, my new routine when I get home from work is to pick Theo up and walk him around the house with my phone playing Nuryl. We do our best to get in an hour a day. You are not supposed to play it while they are sleeping, since they need to be awake and listening. This can be hard, he really likes to nap. He’s napping right now actually. Always napping.

There are times when I can tell Theo is focused, interested and responding to the music, even at only a few weeks old. When he is focused, his eyes get bigger and he stares with intention. Since the playlist repeats every day, it is almost like he recognizes certain pieces or sections.

The testimonials on the app are promising, with users sharing that their babies have started to talk much earlier than expected.

With the world being so competitive and constantly changing, Alex and I want to give Theo every advantage we possibly can. I am not convinced he will develop perfect pitch, especially since Alex and I have very little musical ability, but I do think it’s good for his brain to be stimulated in this way and we get some quality bonding time.

Note: When you purchase something after clicking links in our articles, we may earn a small commission. Read our affiliate link policy for more details. 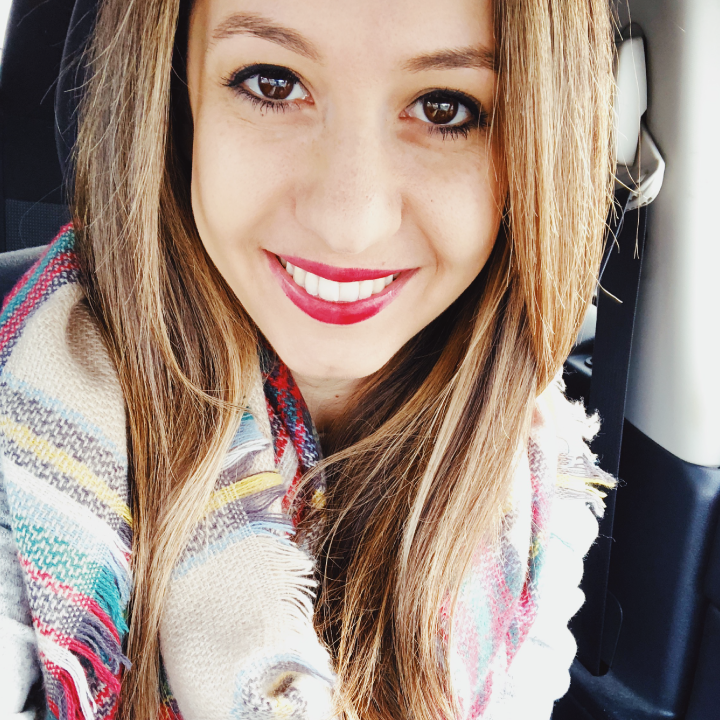 Creative Entrepreneur // New Mama // I’m an elder millennial in my early 30s, have a JD from Berkeley Law, and drink more than my fair share of coffee. This site is for the working mamas looking for tips and reviews from someone who shares their busy lifestyle, preference for quality products and isn’t into Instagram-perfect photos of the baby life.

Creative Entrepreneur // New Mama // I'm an elder millennial in my early 30s, have a JD from Berkeley Law, and drink more than my fair share of coffee. This site is for the working mamas looking for tips and reviews from someone who shares their busy lifestyle, preference for quality products and isn't into Instagram-perfect photos of the baby life.

No spam. Unsubscribe at any time.